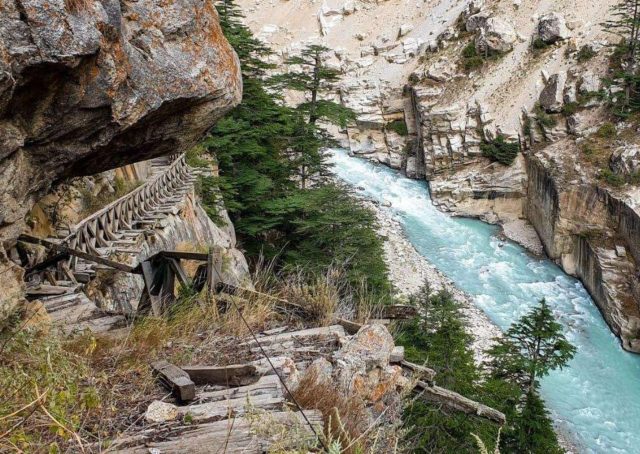 If an adventure trip is something you are planning for your next trip then Gartang Gali is the destination that should definitely be on your priority list.

Gartang Gali is 500-meter long timber-lined stairway in the Nelang, built by the Peshawari Pathans. It was used as a route between India and Tibet by Dorji’s  (Tibetan merchants) to reach Uttarkashi via Sumla, Mandi to trade items like Salt, Jaggery, Spices, Gold, Pashmina wool etc. However, after the Indo-China war in the Year 1962, Nelang valley was closed for the general tourists and visitors, as the place came under the inner line area of Uttarkashi. In 2015, the Ministry of Home Affairs, Government of India granted permission for opening up the Nelang Ghati and Jadung for tourists, however the wooden bridge remained inaccessible to the public due to its bad conditions.

Nearly after 59 years, the Government of Uttarakhand has now opened the Gartang Gali trek for tourists after completing the required restoration and repair work. Tourists can now visit the place and have a pleasant walk over the wooden bridge built in the traditional style by cutting through a single rock.  This bridge gives an exciting view of Nelang Valley, which is rich in flora and fauna and is home to rare animals such as snow leopards and blue sheep.

Speaking on the occasion, Tourism Minister of Uttarakhand, Satpal Maharaj said, “The opening of Gartang Gali trek has added a new dimension to the adventure tourism activities in the state of Uttarakhand. The bridge has historical and strategic importance in the history of Uttarakhand and demonstrates the coordinal trade relations of the country with its neighbors since ancient times.”

Dilip Jawalkar, Tourism Secretary, Uttarakhand said, “The government of Uttarakhand is working consistently to revive the tourism sector of the state which has been affected by the pandemic. The opening of Gartang Gali is in line with our strategy to promote rural tourism with better expedition facilities and generate local employment and business opportunities in the associated areas. An amount of Rs 64 lakhs was spent to reconstruct the bridge in traditional style.”

District Magistrate Uttarkashi, Mayur Dixit added, “We faced many difficulties to reconstruct the area as it is built in a sensitive zone. Keeping corona guidelines at our utmost priority we are allowing only 10 tourists to visit the bridge at a time.”