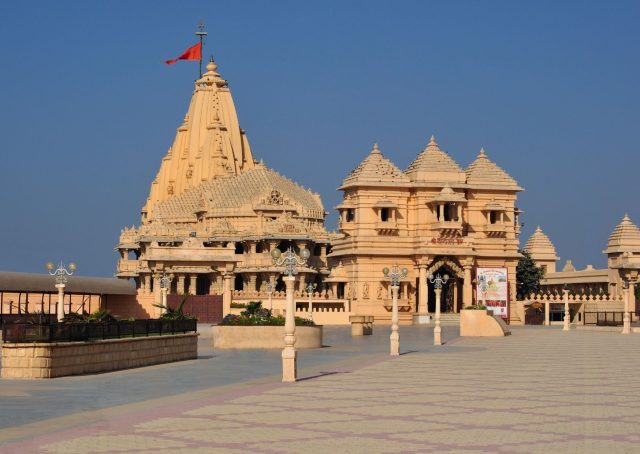 Sh. Narendra Modi, Hon’ble Prime Minister will be inaugurating the components Somnath Promenade and Exhibition Gallery under PRASHAD Scheme of Ministry of Tourism and Ahilyabai Mandir Parisar Renovation carried out by Shree Somnath Trust and also lay the Foundation Stone of Parvati Mata Mandir in Gujarat through a virtual platform today at 11:00 Hrs.

The ‘National Mission on Pilgrimage Rejuvenation and Spiritual, Heritage Augmentation Drive’ (PRASHAD) has been launched by the Ministry of Tourism with the objective of holistic development of identified pilgrimage and heritage destinations with a focus on the development of pilgrimage tourist destinations. Since its launch in January 2015 and as of date the Ministry has sanctioned 37 projects in 24 States with an estimated expenditure of Rs. 1214.18 Cr. and a total amount of Rs. 675.47 Cr. has been released for these projects from FY 2014-15 to FY 2018-19 and the current financial year as on date.

Located about 94 km from Junagadh, the Somnath Temple is said to have been originally built by the moon god with gold. Dedicated to Lord Shiva, the Somnath Temple is one of the most important spiritual sites in the Hindu circuit. Believed to be the first of the 12 jyotirlingas (devotional shrines of Lord Shiva) in the country, the temple sees a large footfall every year. In the month of November, the Kartik Purnima fair organised here attracts a large number of pilgrims.