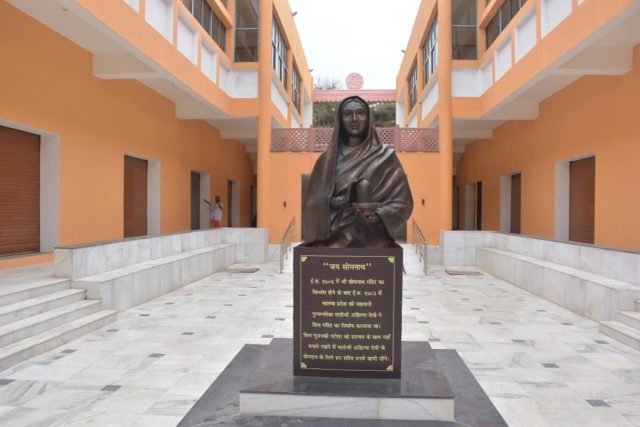 On this occasion the Hon’ble Prime Minister also laid the foundation stone of Shree Parvatimata Temple with a total proposed outlay of INR 30 Crore.

Tourism, Travel And Hospitality has been identified as a key sector of the 5 T’s identified by the Hon’ble Prime Minister. While addressing the gathering virtually, Hon’ble Prime Minister emphasised on the importance of tourism in the country. How our ancestors have understood the importance and role of tourism centuries ago and developed many places which were connected with our belief. He further mentioned about the ‘Development of Iconic Tourist Destinations’ Scheme of Ministry of Tourism. 19 destinations have been identified across the nation and the development of this sites will boost the tourism industry. Prime Minister spoke about the Sabka Sath Sabka Prayas and Sabka Vikas. Tourism is connecting the common man of the country. Prime Minister amplified on the idea of adjoining tourism, pilgrimage and modernity to give way to an effective development. He further highlighted the importance of such developments in helping the upcoming generations in having a better understanding of ancient culture. Hon’ble Prime Minister talked about the consistent efforts of great leader of our country Dr. Rajendra Prasad & Sardar Vallabhai Patel for realizing the dream of developing the Somnath Temple. The idea of #Ek Bharat Shreshtha Bharat that connect the entire nation.

Hon’ble Prime Minister expressed his satisfaction on the significant improvement in the ranking of India in the Tourism and Tourism Competitiveness Index (TTCI) of 2019 by World Economic Forum wherein India ranked at 34th Position owing to its advancement of tourism. Prime Minister also spoke about the development of Ramayana Circuit under the Swadesh Darshan Scheme of the Ministry of Tourism which relates to the life of Lord Ram. Similarly, he mentioned Buddha Circuit which provides facilities to the devotees visiting from across the world. The importance of Spiritual Tourism in the country was talked about. Prime Minister mentioned about 40 Projects of PRASHAD wherein 15 have been totally completed. Further, he emphasised on the inclusion of tour guides as part of the tourism infrastructure to facilitate a better understanding of the destination to the tourists and generates employment. Granting of E-visa in various categories and reduction in the visa fees have augmented the tourism growth in the country.

The ‘National Mission on Pilgrimage Rejuvenation and Spiritual, Heritage Augmentation Drive (PRASHAD) was launched by the Ministry of Tourism in the year 2014-15 with the objective of integrated development of identified pilgrimage and heritage destinations.  The concept of universal access is the first and foremost dimension that is being taken care of while finalising and executing the projects under the scheme.  The scheme aimed at the creation of pilgrimage / religious and heritage tourism infrastructure development at the destinations. At present total of 37 projects in 24 states (including 15 completed projects) are approved with an estimated cost of Rs. 1214.19 crore and a total amount of Rs. 675.89 crore has been released for these projects under the scheme.

The development works of Juna Somnath Mandir Premises include a ramp for universal access, a Courtyard, sitting arrangements for the pilgrims, 15 shops, a lift, and two large halls with an expenditure of Rs. 3.5 crore by Shree Somnath Trust.

The proposed Parvatimata Mandir in Shree Somnath Temple premises would be a grand structure with an area of 1650 Meter and 71 Ft. height using Aras Stones from Ambaji, Banaskantha.  There would be 44 poles, as were there in the original temple, which would be created using Marble in an artistic way. The core Garbh Grih of the Madir contains the land of 380 Met2, and Dance Mandap spreading 1250 Met2.

New projects under pipeline for the State of Gujarat under PRASHAD Scheme are Development of Pilgrimage Amenities at Maa Ambaji Temple, Banaskantha and Development of Public Plaza / Entry Plaza at Somnath.

The Public Plaza/Entry Plaza would be state of art facility to manage the pilgrim’s movement and regulate the pedestrian movement in the temple premises. The state of art facility hosts a parking facility for specially-abled citizens and emergency vehicles (ambulance and firefighting). The entry plaza building will host facilities like restrooms, cloakrooms, cafeteria, and other public facilities like gender-based toilets and pilgrims’ que complex with canopy to regulate crowd during peak time. The location of the facility has been proposed in cognizance of the Master Plan prepared under the Iconic Destination Development scheme (IDDS).  Under the project for Ambaji Temple, basic pilgrimage tourism infrastructure like Tourist Facility Centre, Parking, Public Amenities, Cloakroom, development of stairs at Gabbar Hill and other facilities are likely to be developed.

The development of Somnath has been proposed as one of the iconic tourism destinations by the Ministry of Tourism under its Integrated Destination Development Scheme (IDDS) for the development of components such as Prabhas Patan Museum, Tourist Amenities, Haat, etc. A few regional interventions such as Keshod Airport, improvement of NH-51, development of Sea Plane services, etc. for providing improved connectivity to Somnath, ensuring comprehensive and broad development of the entire region are also proposed under this under consideration project.

In addition to the above, the following projects under the Swadesh Dharshan Scheme of the Ministry of Tourism have been approved for the State Government of Gujarat: