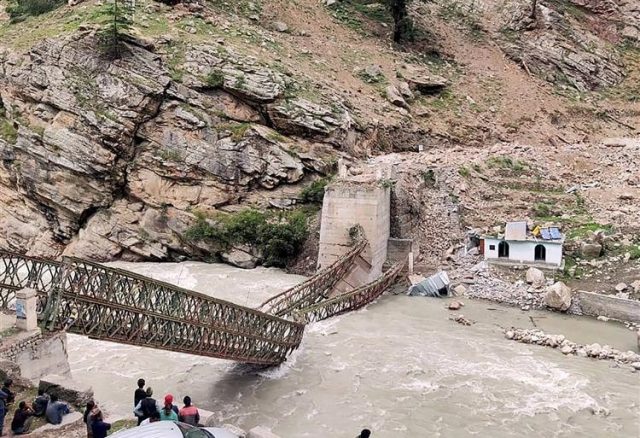 Nine tourists were killed on Sunday after heavy boulders fell on their tempo traveller in a landslide near Basteri in the Kinnaur district of Himachal Pradesh, police said.

Multiple landslides triggered by recent rains occurred near Basteri on Sangla-Chitkul road at 1.25 pm, resulting in a bridge collapse and damage to some vehicles, they said.

A video of a bridge collapse in Basteri has gone viral on social media. In the video, boulders could be seen rolling downhill, causing the bridge to collapse.

According to the police, nine people died and two others were injured after heavy boulders fell on a tempo traveller. The passengers were going to Sangla from Chitkul.

In a similar incident, a pedestrian was injured in another landslide in Kinnaur district, they added.

President Ram Nath Kovind and Prime Minister Narendra Modi expressed condolences over the death of people due to the landslides in Kinnaur.

‘Deeply saddened by the news of the death of many people in a landslide in Kinnaur, Himachal Pradesh. Express my deepest condolences to the bereaved families and wish the injured people a speedy recovery,” Kovind tweeted in Hindi.

Modi said all arrangements are being made for the treatment of those injured and announced an ex gratia of Rs 2 lakh each for the next of kin of the deceased and Rs 50,000 to the injured from the Prime Minister’s National Relief Fund.

He said the prime minister telephoned him and inquired about the incident.

The PM also prayed to the Almighty to grant peace to the departed souls and speedy recovery of the injured, the CM added.

The police said all the deceased were tourists from different parts of the country.