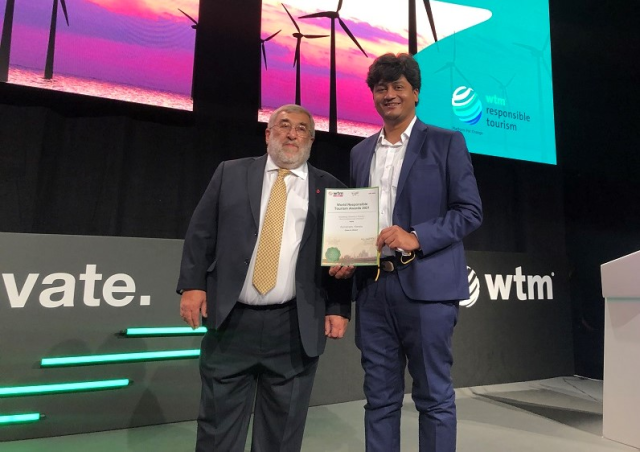 Kerala Tourism Director Shri Krishna Teja, IAS, received the honour at the ongoing WTM in London in the ‘High Speed Diversification’ category for tourist activities spanning two years ending on March 31, 2020. The award-winning project functions under KT’s Responsible Tourism Mission, which was formed four years ago as a nodal agency by the Kerala government.

The project won the WTM recognition 14 months after Kerala Chief Minister Shri Pinarayi Vijayan declared Aymanam as a model RT village. The award comes after the village fully implemented the RT Mission’s guidelines focusing on ecological conservation of tourist spots besides promotion of culture in a way that helps local populace earn income.

The WTM award will further enable Kerala to revive its tourism after a lull following the outbreak of Covid-19 in March last year, according to state Tourism Minister Shri P.A. Mohamed Riyas. “We look forward to getting the travel industry back on track at the earliest,” he said. “The WTM award can help us retain the international appeal Kerala has on the tourist map.”

Dr. Venu V., Additional Chief Secretary (Tourism), noted that responsible tourism seeks to strengthen local development with people’s participation. The government is planning to implement the project in other villages of the state, thereby serving RT models to rest of the country, he added.

The RT Mission is carrying out the model village projects by coordinating the government’s tourism initiatives under respective panchayats. Helmed by KT Mission Coordinator Shri K. Rupesh Kumar, the project seeks to implement a 15-point programme. Launched in 2018 in 13 regions of Kerala, the endeavour has spread to Neendoor, Arpookara, Ezhumanthuruth and Thiruvarpu of Kottayam district in south-central Kerala.

As part of the RT project, Aymanam, along the Meenachil river, has several homestays, while eight more are set to earn recognition. The village is carrying out packages featuring rural life, bird-watching, walks across paddy fields, cycling and sight-seeing of countryside. It has women as tour community leaders, earning world-wide recognition.

The first phase of RT Mission got over in March 2020, giving job training to 617 local residents and 118 entrepreneurs an opportunity to start business. On the New Year day of 2020, Aymanam’s houseboats, shikaras, motorboats and resorts were declared plastic-free.

A second phase is currently on. Having started in September 2020, it is slated to end in March 2022.