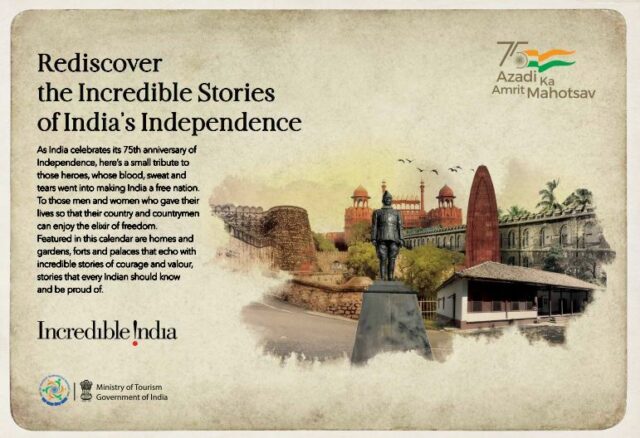 Sabarmati Ashram in Gujarat which served as one of the main centres of India’s freedom struggle and home to Mahatma Gandhi for over a decade along with the 105-year old Cellular Jail in Andaman and Nicobar Islands that once housed political prisoners exiled by British are among the 12 sites across India featured in the new digital calendar launched on Saturday by the Union Tourism Ministry.

The Ministry of Tourism’s digital calendar showcases ‘Incredible Stories of India’s Independence’ as a part of Azadi Ka Amrit Mahotsav and is dedicated to tourism sites across India.

Featured in this calendar are homes and gardens, forts and palaces that echo with incredible stories of courage and valour, stories that every Indian should know and be proud of.

“Here is the Incredible India 2022 digital calendar Ministry of Tourism dedicated to tourism sites across India. As we celebrate Azadi Ka AmritMahotsav, the calendar showcases Incredible Stories of India’s Independence. Featured in this calendar are homes and gardens, forts and palaces that echo with incredible stories of courage and valour, stories that every Indian should know and be proud of,” said Union Minister for Culture, Tourism and Development of North Eastern Region (DoNER), G Kishan Reddy. The calendar is a small tribute to those heroes, whose blood, sweat and tears went into making India a free nation as India celebrates its 75th anniversary of Independence. It is a tribute to those men and women who gave their lives so that their country and countrymen can enjoy the elixir of freedom.

The first monument featured in the calendar is Red Fort, which is described as “Rediscover the incredible journey that transformed a fort into a symbol of independence.”

Red Fort, Delhi: On August 15, 1947, India’s first Prime Minister hoisted the national flag at this historic site that has become the very symbol of India’s sovereignty.

Jhansi Fort, Uttar Pradesh: This imposing fort played a key role in the revolution of 1857 and witnessed the fiery battle led by RLakshmi Bai against the British. Jhansi Fort rediscover the incredible journey that transformed a queen into a warrior.

Sabarmati Ashram, Gujarat: Home to Mohandas Karamchand Gandhi from 1917 until 1930, this Ashram served as one of the main centres of the Indian freedom struggle.

Jallianwala Bagh, Punjab: At this historic garden on April 13, 1919, British troops opened fire on a peaceful gathering of unarmed Indians – killing several hundred and wounding many more. Jallianwala Bagh rediscover the incredible journey that turned a beautiful garden into a martyr’s memorial.

Cellular Jail, Andaman and Nicobar Islands: This 105-year-old colonial prison, once used by the British to exile political prisoners, symbolises both the suffering and heroic struggle of India’s freedom fighters. Cellular Jail rediscover the incredible journey that transformed a prison into an icon of freedom.

Gateway of India, Mumbai: Built in the early 20th century in Indo-Saracenic style, the Gateway is where the British troops ceremoniously left India on February 28, 1948. Gateway of India rediscover the incredible journey that turned a welcome arch into a doorway to freedom.

Khongjom War Memorial, Manipur: This monument commemorates the 1891 Anglo-Manipur War, noted by historians as one of the fiercest battles in the history of India’s freedom struggle. Khongjom War Memorial rediscover the incredible journey that transformed a small kingdom into a big battlefield.

The Residency Lucknow, Uttar Pradesh: Built as the residence of the British Resident General in the 19th century, this Residency witnessed dramatic battles during the Great Rebellion of 1857, such as the Siege of Lucknow. The Residency Lucknow rediscover the incredible journey that turned a residence into the arena of a great rebellion.

INA Memorial, Manipur: A monument dedicated to Netaji Subhas Chandra Bose, this is where the flag of the Indian National Army, formed by Bose in 1943, was first unfurled. The Memorial’s collection of war memorabilia is a reminder of his charismatic leadership. INA Memorial rediscover the incredible journey that turned an Indian Civil Services officer into a champion of freedom.

Vellore Fort, Tamil Nadu: This was the site of the famous Vellore Sepoy Mutiny of 1806, the first large-scale uprising of Indian soldiers against the British East India Company. The uprising is considered as the precursor to the Revolt of 1857. Vellore Fort rediscover the incredible journey that turned a fort into the venue of an epoch-making mutiny.

National War Memorial, New Delhi: This monument pays tribute to Indian soldiers who laid down their lives defending the nation, post-independence. It also commemorates the soldiers who participated and made the supreme sacrifice in Peace Keeping Missions and Counter-Insurgency Operations. National War Memorial rediscover the incredible journey that turned countless tales of bravery into timeless legends. 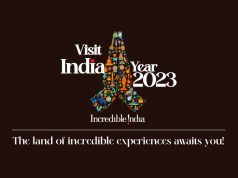 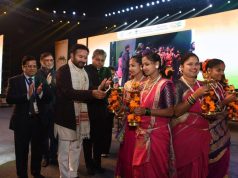 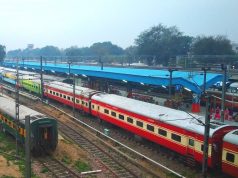