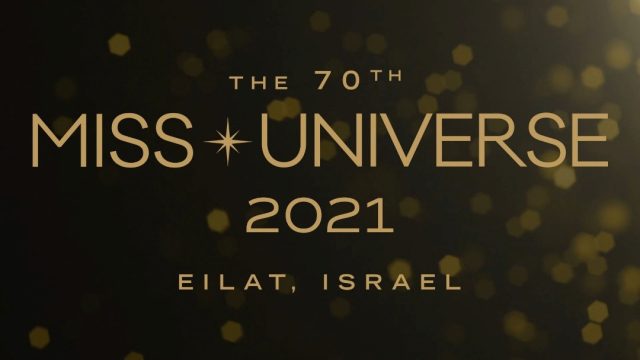 The global MISS UNIVERSE® beauty pageant will be held for the first time in its history in Israel.  The city of Eilat was chosen to be the host city of the competition, which will mark its 70th anniversary this year.

Israeli producer Tali Eshkoli and Los Angeles-based producer Assaf Blecher are responsible for bringing the Miss Universe pageant to Israel, which will be run by the Miss Universe Organization in cooperation with the Israeli Ministry of Tourism and the Eilat Municipality.  From the end of November, competition contestants will arrive in Israel for three weeks of TV events, which will be broadcast live around the world. These include the semi-final and final events, the national costume show, and other gala events such as the red-carpet event, events in the community, charity events and more. The 70th Miss Universe Competition will once again be hosted by legendary entertainer Steve Harvey.

Delegations from about 100 countries are expected to attend the pageant in Israel, including more than 1,200 members of official delegations, hundreds of journalists and TV crews, thousands of pageant enthusiasts and tourists, more than 100 American celebrities, including top-tier artists and world-famous judges.  Every year, the event is widely covered in the media, and it will add Israel to the map of countries that have previously hosted the prestigious pageant.

The choice of Israel as the host country once again underscores Israel’s attractiveness, its rich history and the wide variety of spectacular tourist and resort sites that Israel has to offer pageant viewers around the world.  An international event of this scale will positively impact the awareness and image of Eilat and Israel as a leading tourism destination and a world-renowned international brand.

The show will be broadcast in nearly 160 countries and territories across the globe.  Global exposure to the Miss Universe pageant is estimated at about 1.3 billion people, who follow the pageant in broadcast, print and social media.  The very existence of the pageant in Israel will increase positive global exposure to Israel and brand Eilat and the State of Israel as destinations capable of hosting high-level international events, as has been the case with Eurovision (2019) and Giro d’Italia (2018).  With hotel stays and pageant-related events such as rehearsals, filming, tours and participation in other events taking place over a three-week period, the pageant will contribute to Eilat’s economy and serve as a major growth engine for Israel and its domestic and incoming tourism.

The Miss Universe Organization (MUO) is a global community that empowers women to realize their goals through experiences that build self-confidence and create opportunities for success.  The organization’s programs provide the women who participate in an international platform to affect positive change through influential humanitarian and professional efforts.  The contestants and titleholders are leaders and role models in their communities, develop personal and professional goals, and inspire others to do the same.

Israel Minister of Tourism, Yoel Razvozov: “We in Israel are delighted to host the 70th-anniversary celebrations of the iconic Miss Universe pageant.  Israel is a beautiful land of creativity and innovation and we have successfully faced the COVID-19 crisis head-on.  Therefore, today we are among the first countries to host an international event – the unifying Miss Universe.  What a great opportunity!  An event celebrating women’s empowerment, optimism, tolerance and desire for excellence, that crosses every geographical and national border.  I fully hope that in December we will be celebrating not only the new Miss Universe here in Israel but most importantly, the end of the world pandemic.  I wish all participants good health and good luck and I look forward to seeing you all soon”.

Acting Mayor of Eilat, Eli Lankri: “The city of Eilat is happy and proud to host Miss Universe for the first time in Israel – the global beauty pageant in which beauty queens and delegations from 100 countries will enjoy the beauty of our resort city.  Hundreds of millions more, from around the world, will watch the pageant and be exposed to Eilat’s stunning landscapes.  The event, in collaboration with the Ministry of Tourism, will be held in the port of Eilat against the backdrop of spectacular views of the Gulf of Eilat, one of the most beautiful in the world, and the reddish hues of the Eilat Mountains.  As a resort city that hosts three million holidaymakers and dozens of international sporting and cultural events every year, we are happy to host everyone coming to the pageant.  Some will land at Eilat’s Ramon International Airport, and all will enjoy the resort city’s hotels, restaurants, attractions, shopping centres and Eilat’s unique natural resources, including the sea and the desert.  We thank the Miss Universe Organization, the Israel Ministry of Tourism, the Hotels Association, the Port of Eilat and the sponsors on the selection of Eilat as the host city.”

Tourism Ministry Director-General Amir Halevi: “We are proud to host the 70th anniversary celebrations of the Miss Universe pageant in Eilat – a year-round sea and sun resort city.  We see this event as an opportunity to leverage Eilat and the Negev as an attractive tourism destination.  The pageant will expose millions of viewers around the world to the Israeli desert, with its spectacular natural beauty, the meeting point of the Eilat mountains with the Red Sea, the breath-taking desert craters and, of course, the pleasant winter weather – a place that is a refuge from the cold winter climes of North America and Europe. I believe that, by the end of December, the tourism industry will begin to sprout buds of recovery from the crisis and the pageant will even encourage the return of international flights into Ramon Airport.”

Tali Eshkoli, Miss Universe producer in Israel: “Israel once again proves that it stands alongside leading countries of the world that are capable of hosting international events of such significant size.  For many months, and as a natural continuation of producing the Eurovision Song Contest in Israel, we have been working day and night to bring in the right partners and bring the competition to Israel.  I am happy and excited to produce this huge event here for the first time.  The leading professionals in the country will join us and mobilize to successfully host the thousands of members of the delegations, journalists and tourists who will come especially to Israel to take part in the event.  Without a doubt, we have a great and extraordinary opportunity to expose Israel to hundreds of millions of viewers around the world, and I thank the Ministry of Tourism and the Eilat Municipality for their fruitful cooperation.”

Assaf Blecher, co-producer of Miss Universe Israel: “For me, this is a dream come true.  Having previously produced Miss Universe, I have been working for years to bring the production to Israel.  I believed it would happen, mainly to showcase to the world the story of our country as a warm, loving and accepting country.  The way in which Israel has dealt with the Corona pandemic over the past year and a half has also been a significant and decisive factor for the Miss Universe Organizers in their final choice of the Holy Land as the host country.  We are prepared for any scenario and will act in accordance with the guidelines as required.”

Itamar Elitzur, CEO, Eilat Hotel Association: “The Eilat Hotel Association is proud and excited to be a significant part in the hosting of the global Miss Universe pageant in Eilat and welcomes the fruitful cooperation between Eilat Mayor Mr. Eli Lankri and the Israel Ministry of Tourism.  There is great importance in hosting significant and large events for the resorts of Eilat, which will place the pearl of Israel’s tourism on the map of international organizers as a city with potential for performances by leading artists, for sports competitions and entertainment shows and will promote international tourism, especially during the winter season.”

Paula M. Shugart, president of the Miss Universe Organization: “Israel has been on our shortlist of host countries for a number of years due to its rich history, beautiful landscapes, myriad of cultures and appeal as a global tourist destination,”

“As we sought an impressive location for our 70th-anniversary celebration, it became clear through our conversations with acting Mayor Lankri and the Israeli Ministry that Israel has the best resources to host MISS UNIVERSE in December.  We look forward to deepening our commitment to creating meaningful cultural conversation, connection and understanding through this partnership.”