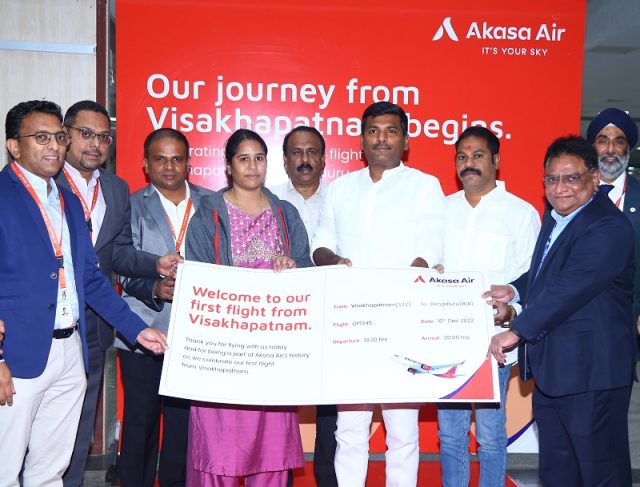 Akasa Air yesterday operated its maiden flight from Visakhapatnam, its tenth city, marking the airline’s foray into the state of Andhra Pradesh. Akasa Air will offer double daily flights on the Visakhapatnam-Bengaluru route; the second frequency with the added benefit of an early morning option will start from December 12, 2022.

This launch to Visakhapatnam, a city playing a key role in India’s aviation growth story, further reiterates Akasa Air’s commitment towards enhancing regional connectivity and strengthening important transportation links in our country. The airline’s operations from Visakhapatnam will cater to the increased demand for travel from the city while offering its signature warm and reliable service to passengers on the most affordable fares.

Earlier in December, Akasa Air announced the addition of Lucknow as the eleventh destination on its network, with flights connecting the city with Bengaluru and Mumbai, scheduled to commence from December 25, 2022. Since its launch in August this year, Akasa Air has been progressively scaling up its operations and by December end expects to cross over 500 weekly flights on a total of sixteen routes across 11 cities – Ahmedabad, Bengaluru, Kochi, Chennai, Mumbai, Delhi, Guwahati, Agartala, Pune, Visakhapatnam and Lucknow.

It will continue to grow its network to establish a strong pan-India presence focusing on the metro to tier 2 and 3 route connectivity, using a fleet expansion plan that adds one new aircraft every 15 days. Akasa Air’s fleet size will be 18 aircraft by the end of March 2023 and over the next four years, the airline will add 54 additional aircraft, taking its total fleet size to 72 aircraft.